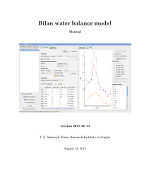 The Bilan model has been developed to simulate components of the water balance in a catchment. The structure of the model is formed by a system of relationships describing basic principles of water balance on ground, in the zone of aeration, including the effect of vegetation cover, and in groundwater. Air temperature is used as an indicator of energy conditions, which affect significantly the water balance components. Its time resolution is one day or one month.

Input data used for water balance computation is daily or monthly series of basin precipitation, air temperature and relative air humidity (optional). To calibrate the parameters of the model (applying the optimisation algorithm), simulated and observed daily or monthly runoff series at the outlet from the basin are used.

The model simulates time series of daily or monthly potential evapotranspiration, actual evapotranspiration, infiltration to the soil and recharge from the soil to the aquifer. The amount of water that is stored in the snow pack, the soil and aquifer is also simulated for each time step. All these hydrological variables apply to the whole catchment. The total runoff consists of two or three components, that is direct runoff, interflow (monthly time step only) and base flow.

The model has six (daily time step) or eight (monthly time step) free parameters and uses an optimisation algorithm for their calibration at gauged basins. The optimisation is aimed at attaining the best fit between the observed and simulated runoff series, for which several optimisation criteria are available.

The temperature and eventually the relative humidity are used for the calculation of the potential evapotranspiration. The temperature is also used for the distinction between winter and summer conditions (regime type). If a snow pack occurs, a snow storage algorithm and melting algorithm are applied. Melting snow and rainfall infiltrate into the soil. In the soil the infiltrated water is stored that can be extracted by agricultural crops or natural vegetation later. The crops or vegetation extract soil moisture at a potential rate (potential evapotranspiration) as long as there is sufficient water in the soil. If there is insufficient water in the soil the actual evapotranspiration will drop below the potential rate. During wet periods, when the precipitation exceeds the potential evapotranspiration, the surplus is used to replenish soil water storage. Subsequently, percolation from the soil occurs if the soil moisture storage reaches maximum soil capacity. The percolation from the soil can follow a quick path towards the stream through interflow (monthly type only) or as recharge, a slow path trough the aquifer. A third (second) streamflow component, i.e. surface runoff, may also occur if the rainfall amount is high.